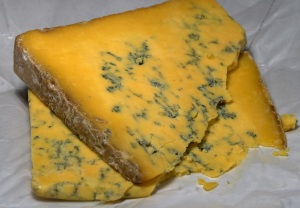 Shropshire Blue is a cow’s milk cheese made in the United Kingdom. The cheese was first made in the 1970s at the Castle Stuart dairy in Inverness, Scotland by Andy Williamson, a cheesemaker who had trained in the making of Stilton cheese in Nottinghamshire. The cheese was first known as ‘Inverness-shire Blue’ or ‘Blue Stuart’, but was eventually marketed as ‘Shropshire Blue’, a name chosen to help increase its popularity, despite it having no link to the county of Shropshire.